Moontangled by Stephanie Burgis is a Regency fantasy with a low-angst second-chance romance between two young women, one an aspiring politician and one a magician in training.

In Burgis’s Angland, history and reality took a sharp turn away from our timeline back in the first century when Queen Boudicca joined forces with her magic-wielding second husband to evict the Roman conquerors. The effectiveness of this alliance was taken to be due to the natural superiority of women rulers, backed by the talents of men whose emotional natures suited them best for the practice of sorcery. Thus, the expectation that every member of the all-female ruling Boudiccate must marry a talented sorcerer. Although same-sex marriages are perfectly acceptable for ordinary people, the ruling class accepts this time-honored tradition that women do politics paired with men who do magic.

That is, most people accept it. In the first several installments of the Harwood Spellbook series, Cassandra Harwood successfully rebels against the prohibition against women learning magic and even establishes a school for magical girls, and her sister-in-law overcomes the handicap to her brilliant political career that comes in the form of falling in love with Cassandra’s non-magical brother. Now, in Moontangled, some consequences of those events come home to roost for aspiring sorceress Juliana Banks and political hopeful Caroline Fennell. They promised they’d find a way to be together, but will the Boudiccate accept Juliana as fulfilling the need for a magical spouse? And will the scandal that rocked Caroline’s family (in a previous book) threaten the tentative acceptance of the Thornfell College of Magic? Why have Caroline’s recent letters been so cold and distant? Juliana is determined to find out when high society assembled for the Thornfell ball.

All the characters in this story are simply delightful. Both Juliana and Caroline have solid motivations for doing bone-headed self-sacrificing and self-destructive things, but brains, communication, and love win out in the end.

This is a fluffy, bite-sized feel-good romance with enough adventure and peril to keep the heart racing. Burgis writes in a variety of registers and this series falls in what I’d call “YA-adjacent”. Not technically YA because the protagonists are adults, but with a very accessible prose style and focusing more on characters and action than worldbuilding.

One of the things I liked most about this story falls outside the covers of this book entirely. Although this is the fourth installment of the Harwood Spellbook series, the romance between Juliana and Caroline has been on-page from the start, with a solid promise that they’d get their own book. Lately I’ve enjoyed several f/f historical romances that were spun off of an existing series with other pairings, but this is the only one where it feels like an integral part of the series and not an add-on.

No cons. None whatsoever. It might help to read the previous books in the series first, not because they’re necessary for enjoying the story, but because you get to see more of the protagonists earlier in their relationship.

This book is ideal for people who like Regencies, fairy tales, and confectionary in book form.

Excerpt from Moontangled by Stephanie Burgis

She’s back. Memories cascaded over Juliana from the last visit, when the ruling Boudiccate had assigned Caroline Fennell, the assistant to one of their own most famous members, to their inspection team for Thornfell College of Magic.

Warm breath brushing softly against Juliana’s throat, tingling against the sensitive skin behind her ear as sensations overwhelmed her from every angle…

Warm hands sliding possessively up her sides, unbuttoning the bodice of her gown with eager fingers. “Finally…”

And then that glassy-eyed, utterly distant look just one night later, when Juliana had slipped into Caroline’s bedroom after everyone else had finally fallen asleep. She’d been so desperate to seize their last possible moment together before Caroline was sent off on her next political assignment…

But the woman who’d been her secret fiancée for years had looked up with a frozen, unnatural expression from the bed, and she had slowly shaken her head. “I don’t think this is a wise idea. Do you?”

(this link works for Amazon US, Germany, and Canada)

I just read this review for Moontangled by Stephanie Burgis 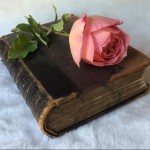 Running From Forever by K. Aten is a supernatural romance that shows us escaping love’s grasp is not so easy

More Than Words by Harper Bliss is the ninth installment in her Pink Bean series. Like all the others, this